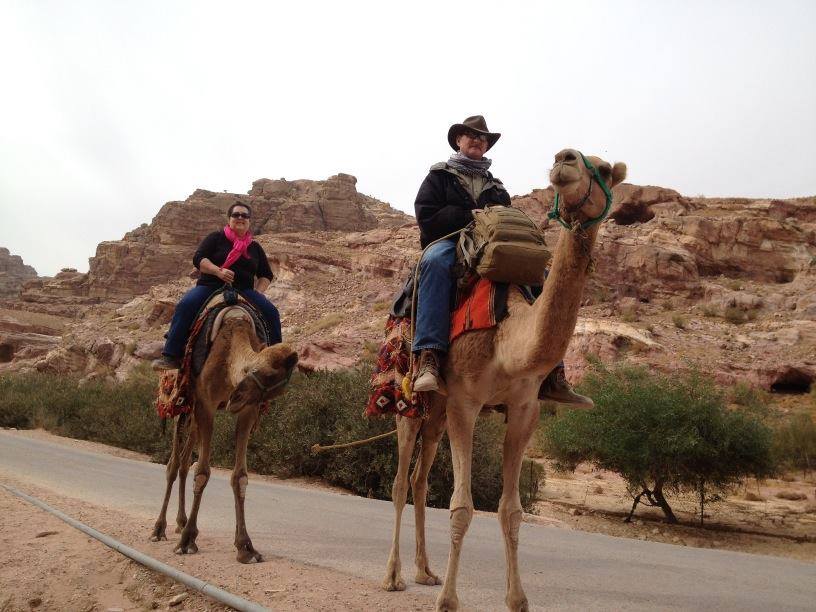 Living in the Middle East, it’s not hard to find interesting places to visit within a decent travel radius. Last November, with a 5-day weekend approaching for the United Arab Emirates (where we live currently) National Day holiday, we decided it was time to visit Petra, Jordan.

Petra – the Rose City. Home at one time to the ancient Nabatean people who are responsible for the magnificent monuments hand-carved into the colorful rock formations of Petra. Later, home to native tribes of Bedouin people who lived in the caves and among the ruins of awe-inspiring monuments. The Bedouins lived there for many years with very little to disturb their way of life. Later, they mingled with the ever-increasing loads of tourists that came year after year, eventually causing the Jordanian government to force the Bedouins out of Petra in 1984 and move them to a nearby village, a refugee camp of sorts, so that Petra would be protected and preserved. This kind of reminds me of what happened to the Native Americans with the Western migration of the white man.

We wanted to see Petra and were dutifully impressed by its magnificence. If you’ve traveled to any of the major tourist destinations of the world, you know how difficult it can sometimes be to deal with the local vendors and merchants. Petra is no different and our interactions with the Bedouin vendors were typical for Western tourists – we were pursued aggressively by the merchants and harassed to purchase their wares. It was uncomfortable. We aren’t souvenir shoppers, so we handled the interactions as we usually do, repeatedly declining as politely as possible until they gave up on us and moved on to another tourist.

Petra is a place that necessitates visitors be at least reasonably fit in order to see it. Even if you don’t plan to climb the steps to the High Place, or walk the entire distance to the Monastery, or visit Little Petra or Aaron’s Tomb, there is a significant amount of walking over long distances and uneven surfaces, much of it uphill. Travelers should prepared for that.

The tourist industry being what it is, camels are everywhere in Petra, their handlers negotiating prices to carry hot, tired tourists on camel-back along the lengthy route from one end of Petra to another. I had done some preliminary reading and found that there would be camels, horses, and donkeys owned by the locals and peddled as tourist transportation. My research indicated that these animals were often mistreated. We saw horses struggling up the hills trying to pull buggies overloaded with entire families of overweight tourists. It was heartbreaking, but for some Bedouin families, this is their only source of income. There have been some animal-rights advocates who, in recent years, have stepped in and put in place some measures to help prevent abuse of the animals while still allowing families to make a living.

A young Bedouin man named Bilat approached us with his camel. “You want camel to take you back up to Treasury?” he asked us. We had already walked a good portion of the way into the heart of Petra. The Treasury is the first of the monuments you encounter in Petra once you have walked through the Siq – the entrance to Petra. It’s the monument most often featured in photographs and publications, and is truly magnificent. Knowing we would be facing the long, uphill walk back to the Treasury and then more uphill through the Siq at the end of our day, we still declined. We didn’t want to contribute to any animal’s suffering or mistreatment. Then Bilat said, “My camel is strong. I can take you out the back way, through my village. You will see different scenery and be away from the crowds.”

Hmmm, now that was an offer worth considering. But Bilat had only one camel, and we were two grown adults. Now, I’ve seen camels carrying two riders here in the UAE – the handlers that train the camels for camel races. But these are usually very small men. Indiana Joe and I are not small men. Either of us! Bilat’s camel appeared to be well-cared for, strong and healthy. Still, we had no desire to overtax the poor creature with both of us on his back. Bilat, it turns out, had many friends and within minutes had negotiated a deal for a second camel, also a fine-looking fellow, from another Bedouin. Looking at these sturdy animals and remembering that camels have been transporting men across the desert for centuries, we decided that transporting us a few kilometers would not be an overly stressful mission. And so we made our deal with Bilat. We finished our visit inside Petra, going inside the museum and looking around at the caves and amazing monuments carved into the sandstone a bit more. When we were finished, Bilat was there waiting for us with two gigantic camels, ready to carry us out of Petra along the back roads.

And so off we went. Somehow I managed to climb aboard my camel’s back and onto the saddle. Bilat coaxed the camel into a kneeling position, which still made the hump and saddle at a height above my head!  He then fashioned a stirrup for my foot from the hanging edge of the saddle blanket, had me put my foot in, and – whoof! – up I went! Despite painful hips (getting old hurts!), I managed to swing my leg up, around, and over the saddle and settle onto the seat – adrenaline can be a good thing. “Hold on to the horn,” Bilat said, “and lean way back.” I gripped the horn of the saddle and leaned back. The camel rose…first the back legs, which is why you must lean waaaaaaayyyyy back. Then the front legs, setting off a swaying motion similar to one of those mechanical bull machines in a Texas bar. That’s where holding on to the horn of the saddle comes into play. Indiana Joe was also mounted aboard his camel by now and we were ready to go.

On a side note – Indiana Joe, being taller than the average man, looked a little awkward with his long legs dangling down the side of a camel! Like he didn’t know what to do with his legs, and the camel didn’t either. Two lanky creatures with exceptionally long legs. Funny!

Anyway, we set off. Heading out a little side road from the main path of Petra, we left the site and the crowds behind. The camel’s gait was very pleasant, just a gentle swaying motion from side to side – possibly the reason camels are known as “the ships of the desert”. We looked up at the mountains and rock formations on either side of us and marveled at the majestic, natural beauty of it all.

There were caves here too and Bilat reminded us that until just a few years ago, the Bedouins lived in these caves and the ones throughout Petra. We steered our camels off the path and over to a cave entrance. The colorful rock, hand-carved to a smooth wall inside the cave, made its own artwork. The red, gray, cream, and orange swirls of the rocks were so vivid! Pictures can’t even compare with the real thing. And imagining people living here, in these caves, was difficult to comprehend.

On we went, up, up, up, along a single-lane road. Let me just say that the view from the top of a camel, watching the back of his head and that long neck as he galumphs along, is pretty awesome! We rode into the village where Bilat and his family lived. This was the village the Jordanian government had built and then in 1984, moved the Bedouins out of Petra and into the homes. It was a simple village of basic homes and Bilat said it had been his home since he was born, but that his parents had moved here from their camp inside Petra. He told us he had a wife and children, and that he did not plan to take any more wives. His father, he told us, had two wives and with two wives, it was just two times the headache! We laughed about that with him and said yes, perhaps one wife was enough headache.

Our 30-minute journey on camel-back had been interesting and enjoyable, but now my hips, stretched to their limit across the camel’s back, were ready to get down off the back of this camel! We reached a stop just inside the village and Bilat told me to lean back again. I did and he coaxed the camel down to kneeling again. I managed to kind of slither sideways off the camel’s back but somehow ended up landing slightly on his neck. This was mainly due to Bilat “helping” me by wrenching my leg up over the saddle to an angle that my hips definitely do not do anymore! Anyway, the camel turned his head toward me and gave me a, “Laaawwlllwaaallww…” his lips undulating with the sounds. I told him I was sorry and patted his neck and he responded once again with, “Awwllllaaaaawwll…” We thanked Bilat for the journey and climbed into the truck he had arranged to take us back around to the entrance where our car was parked.

There is a book, an autobiography, written by a New Zealand woman who, in 1979 married a Bedouin man and lived her life among the Bedouin in Petra, first in a cave and later in the village, until his death in 2002. I purchased this book and have only just recently finished reading it and it made the whole Petra experience so real to me. It helped that I had been there and could visualize many of the things and places she describes. There is a picture in the book indicating the location of the high cave where they lived, and I can recall standing just below that place during my visit! I really enjoyed reading the book, Married to a Bedouin, and I have written my thoughts about it in another post on this site under the “Books” category.

This was my first visit to Petra, but I feel like it won’t be my last. Jordan is a beautiful country and we saw much more than just Petra, which I hope to write about in another post. Petra is one of those places you find listed on those lists of “The 10 Most Important Places in the World to See” or similar. A UNESCO World Heritage site (designated December, 1985), it’s definitely worth visiting. But don’t go just to check it off a list. Go for the beauty and the history of the place, and try to look beyond the typical “tourist” viewpoint. It can change your perspective. It did mine.