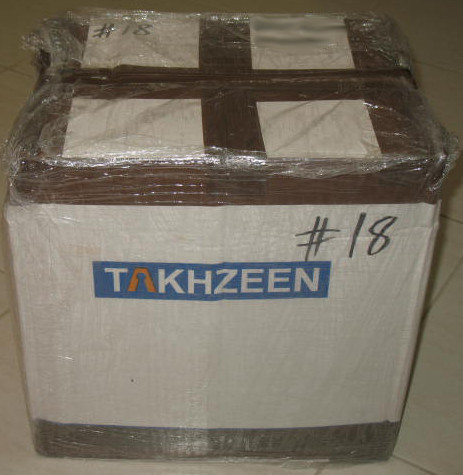 It’s been seven months since I arrived in the United Arab Emirates. Getting here was not a problem, other than the long, uncomfortable flights from the US. But for the most part, my trip was trauma-free.

But getting our stuff here…now that was another story.

Packing up to leave Bahrain in June, we looked at the pile of boxes, suitcases, and trunks and marveled at how much stuff there was. Arriving in Bahrain two years earlier, we had one suitcase and two K-Mart plastic footlockers for each of us. Six pieces of luggage had somehow, over the course of two years, morphed into a collection of 32 pieces, fully-packed with our stuff.

We traveled some during the two years in Bahrain, so yes, there were a few souvenirs and other tidbits in those boxes that we hope to take home someday. But really. Where did all this stuff come from?!

Well, wherever it came from, eventually, the stuff made it to our flat in Abu Dhabi. (Read more about that misadventure in another post.) My husband arrived in August and immediately began work, so he only opened the suitcases and boxes that contained his clothes. I came four weeks later and began trying to unpack all of our stuff into a tiny, cramped flat. It was partially furnished so we had a bed and some ancient sofas, but only one wardrobe cabinet and no chests-of-drawers. 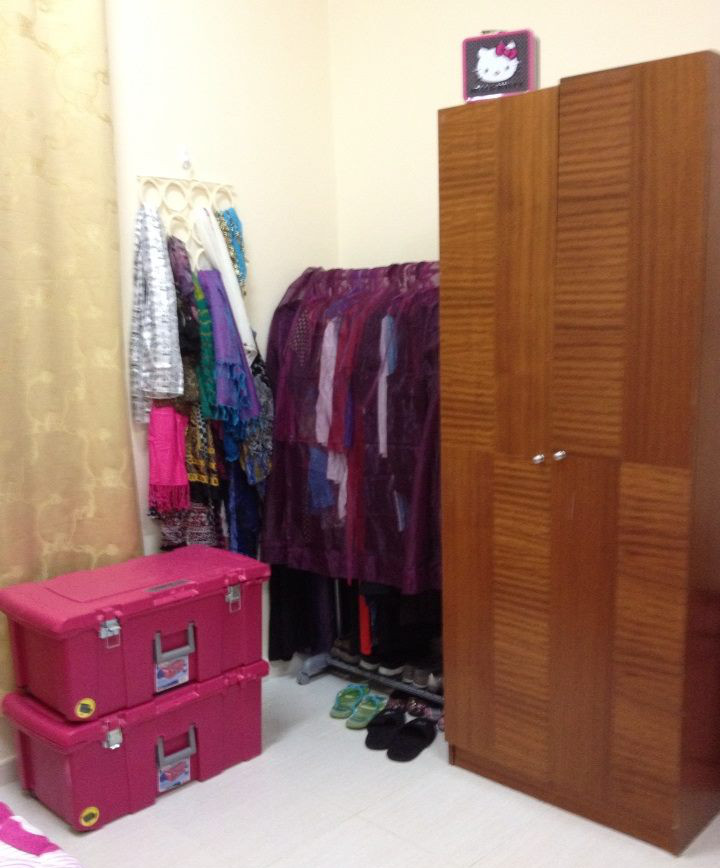 Now I ask you, how is any woman with any sort of reasonable clothing wardrobe, supposed to share a single wardrobe cabinet with a man?! And no drawers for undies, socks, and t-shirts?! It was time to get creative! Over the next couple of weeks, I cobbled together clothing storage for the two of us. Since my husband was working and needed clean, pressed shirts, I put his clothes in the wardrobe cabinet with his folded undies, socks, and t-shirts on the top shelf of the cabinet. A free-standing garment rack purchased from the local Mega-Mart would do for the hanging things I would wear most often. Everything else would stay packed in the K-Mart trunks and, stacked two high, the top one could stand in as my chest-of-drawers. It was a viable solution so I went with it.

Gradually the boxes were unpacked and our stuff was put away or it was repacked until such a time as we had a place to put it.  Having moved a ridiculous number of times in my life, I’m a relatively organized person about such things. So, while still in Bahrain during the packing phase of the move, I meticulously labelled each box, on the top and on the side, with the general contents so I would know which to unpack first, and which ones could wait. These labels were helpful as I made my way through the boxes.

Box 18 had no label. I looked at the packing list created by the movers to see if the contents were described there. No such luck. “Misc. household” was the movers’ assessment of what was in Box 18. Doing my own assessment, I couldn’t imagine what was in it either. Nothing seemed to be missing. I tried to visualize myself packing this box and why I didn’t label it. Nothing. So, having plenty of other boxes WITH labels to deal with, I simply set Box 18 aside. 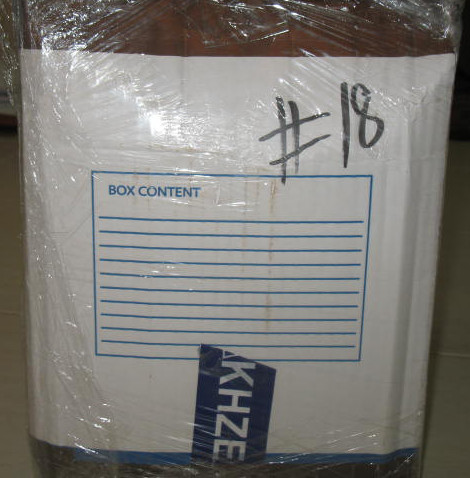 I want to pause here for a moment and say, for the record, that I love my husband very much. But he is a packrat. A big one. And he’s a piler. Do you know what I mean by that? A piler can’t throw anything away or organize things into useful systems, so they just pile them up. During the last weeks in Bahrain, while I was busily sorting, tossing, packing and labeling our stuff into boxes and trunks, I…ahem…encouraged Indiana Joe to deal with his piles. Most of it was school papers or school-related information and we were not coming back to this school, so I…ahem…encouraged him to toss this stuff. He did manage to do some of his own packing of his personal things, but on moving day, he was still walking around with assorted non-packed items in his hands, wondering if there was a box the things could go into. Nevertheless, the boxes were packed, loaded, and eventually delivered.

We’ve settled in here fairly comfortably. Using the local swap-and-shop, we replaced the worn-out 1960’s-era plaid sofas with another used set that’s easier on the eyes…and buttocks. We found a nice rug around which to arrange this seating, and visited IKEA for a simple shelf unit and some lamps. The place is at least comfortable now, if still very small. The boxes that are still packed have been identified for later and stacked neatly out of the way. Everything accounted for…except Box 18.

So last week, I decided to finally find out what was in Box 18.

Opening it up, I found it filled with papers. Standard A4 printer papers mostly. Box 18 contained the large piles of papers my husband had sorted and discarded…but never actually put into the trash bin back in Bahrain. The movers, anxious to just get everything in boxes, threw these piles of papers into a box and sealed it up. 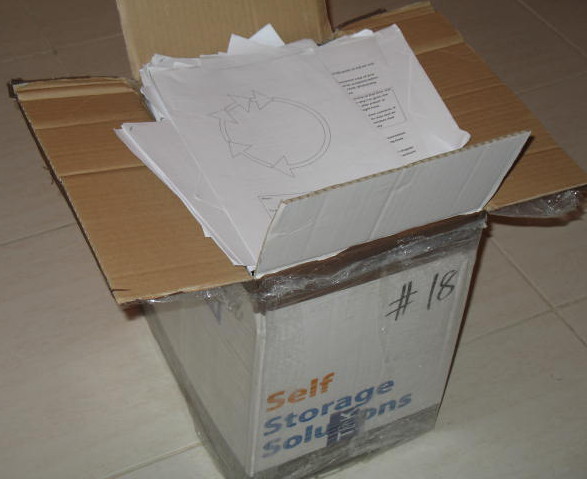 So, our moving expenses included bringing with us an entire box of last year’s trash from Bahrain. Huh.